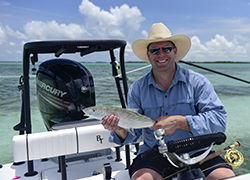 Flats fishing requires a good bit more of hands on effort from the angler than most fishing charters and a bit more advanced fishing knowledge. Whether an angler is fly fishing or light tackle spin fishing there are some skills an angler is expected to bring to the table. Mostly rod handling and casting ability. These skills should be intermediate to advanced level to make the most of a flats fishing charter.

In itself flats fishing is not the easiest way to go fishing here in Key West but in my opinion one of the most rewarding. A dedicated flats fishing adventure here in Key West is about the Key West grand slam of tarpon, permit and bonefish. Granted there are other species to fish for but these three are the main focus for sight fishing the flats of Key West. Otherwise See: Key West backcountry fishing where the same species apply but the dicipline is very relaxed and more inviting to lesser skilled anglers with more rewarding moments.

A fishing guide can't just wake up one morning and decide to be a flats fishing guide. The shallows are easy enough for an experienced Key West captain to navigate but unlike other types of fishing, flats fishing is not about where to be, but when to be there to be successful. A good flats fishing guide also has amazing boat handling skills with a push pole, able to propel the boat along at any angle needed to gain an advantage for his anglers to get the shot at a spotted sport fish. His boat is a fine tuned shallow water skiff that is easily maneuverable with a decent dryish ride. Most flats fishing skiffs are able to cary two or less anglers. 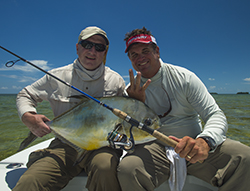 Sight fishing is very challenging. The connection between the flats fishing guide and the angler is very important to have a successful day on the water. The fishign guides job is to spot the fish and relay to his angler where he needs to cast to present and ultimatly catch the sport fish. This is done by the use of relative terms such as the clock face on the boat to refer to the direction of the cast and distance in yards or feet to refer to how far the cast needs to be to intercept the fish that was spotted. All this needs to happen somtimes in less than 15 seconds.

A flats fishing guides success in fishing often relys on his anglers ability to listen, cast, present a bait or fly and fight a fish to catch. At the end of the day an angler may have seen lots of fish and had some great shots but if nothing was caught, often times thats how the flats fishing guide is graded. Because of this most flats fishing guides are generally a control type personality. Not the softest of the fishing guides yet the most focused and diciplined.

Some folks will require a steadier boat when flats fishing. This is totally possible by using a bay boat for the shallows. Bay boats are a much steadier platform for fishing. A stat of the art bay boat can float in less than 12 inches of water. Same dicipline applies, same method of fishing, bay boats offer a non traditional easier approach to flats fishing.

Booking a flats fishing charter is easy. Because we feel the relationship with our clients is very important you will need to call us or email us to reserve a trip. That way we know exactly what you are looking for in your day of fishing and we can make sure you are on the right trip with us and you know what you will be getting.
Please review our Frequently Asked Questions Page for more details about bookings and questions that have popped up.

Flats Fishing Charters With A Theme.

Bonefishing - Made famous here in the Florida Keys. Sight fishing the flats for bonefish is a great way to enjoy flats fishing.

A property of The Keys To Key West Inc. The premier Key West vacation service. www.fishingcharterkeywest.com is updated weekly and offers many different fishing opportunities and experiences here in Key West.

The Keys To Key West Inc.