The species that change with the seasons here in Key West. While we have great fishing year round for a multitude of species there are times that are hotter than others for a specific species an angler would like to fish for.

This is a guide to help anglers decide when a good times for fishing Key West based on certain species. When they are here and available to catch. No particular order..

These are not the legal seasons, bag limits or size limits of any of these fish. If you are DIY please check your local regulations frequently to stay up to date and out of trouble with the FWC. These rules are constantly changing and ignorance is not a defense. We alway recommend that anglers hire a reputable fishing guide or charter to take them out. They keep up on the latest rules and reg changes.

Tarpon Season is hard to put a finger on. Traditionally the migration for tarpon coming through the Key West area is the first week in May through June and sometimes into July. Thats what we call, Tarpon Season. However, we are tarpon fishing here year round in one form or the other. The larger fish start to come in out of the Gulf or Mexico around February we generally start tarpon fishing charters in Mid March where anglers can have good shots at big tarpon on live bait, artificial and spinning rod. In Late March we get laid up tarpon in the backcountry which kicks off our fly fishing for them. After the spawning migration is over July - October will host smaller tarpon that we target on our backcountry fishing and flats fishing charters using a fly fishing rod or spin fishing rod. 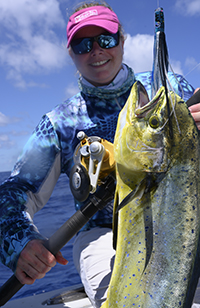 Sailfish are here year round off of Key West. There is not a week in the year a sailfish has not been caught by our deep sea fishing fleet out of Key West. That said, the actual "season" we anticipate will start in March and go through May with hoards of fish jammed into a one or two week frenzy of sail-fishing. Kite fishing from reef fishing boats is a very popular way to catch sailfish off of Key West.

The fish so nice they named it three times. Dolphin are a spring and summer season fish for us here in Key West. Riding the Gulf stream mahi come right down the reef line eating everything in their path. They are the fastest growing fish in the ocean. The fish mostly sought after by deep sea fishing charters trolling the blue waters. Food quality is excellent.

Our most popular tuna here in Key West. Yes, we get other species but not consistent enough to mention here. Our blackfins start popping up real good in November and stay steady through the winter in our Atlantic waters. In the Spring season April and May we get very large blackfin tunas in the Gulf of Mexico tailing behind the shrimp boats as they clean their decks from the night before. Our reef fishing charters are the best way to target them in the Gulf..

While it is possible to catch a marlin here in Key West year round some say summer is best durring the full or new moon. Some say November / December are best but, it can get a bit rough on the deep sea waters to go find one during that time of the year. Key West is not truly a marlin fishing destination, we catch them here but not often. They do make the Key West fish species list for fish that we fish for. Deep Sea fishing is the best way to target marlin.

November in Key West fishing seasons means wahoo to many fishermen. The full and new moon wahoo come close to the reef and feed. Our Key West wahoo run from 15- 60 lbs in size and can be targeted trolling or live baiting. The fastest swimming fish in the oceans wahoo can rip line off amazingly fast. Deep sea fishing charters or our reef fishing guides are the best ways to go for wahoo. 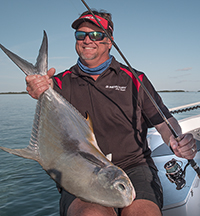 Cobia are a fun fish to fish for and typically a winter species for us here fishing in Key West. Cobia will come in down from the Gulf of Mexico and hang out on our wrecks both shallow and deep snacking up on bait fish and the like. Wreck fishing trips are a great way to catch cobia. We also catch cobia on our flats fishing trips and backcountry trips as well more frequently on the colder winters from February through March. Often times they are trailing bull sharks and rays in the shallows. We like to call cobia the cows of the sea. They have a great food value and incredible high yield per fish.

Also Known as King Mackerel our Kingfishing is best in the winter season here in Key West. Our kingfish tournament is usually held in January. Cooler water temps keep them on our reefs from December through March catching a kingfish of 40 - 60 lbs is not uncommon during this time. Reef fishing for them with live bait or trolling the reef on deep sea fishing boat is the best way to target these fish. 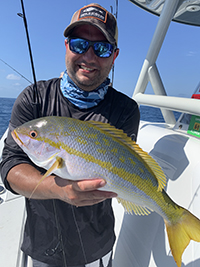 Grouper are so tasty that everyone wants to catch them. They are here year round so there are federal laws that protect grouper. Currently the Atlantic Ocean we are are allowed to legally catch grouper From May 1 to December 31. Gulf rules fluctuate more often than not so check out the web site that tells you all about that and is updated.

Mangrove Snappers, Yellowtail snappers and Mutton Snapper are available year round here out of Key West with the larger fish being caught in the spring and summer. Most of our snappers spawn in the late spring to summer months so typically the fish are larger.

Bonefishing was made famous in the Florida Keys many years ago. They are a catch and release sport fish that is pursued by our flats fishing guides with no legal seasonal restrictions. In the winter they go deep to avoid the roller coaster of water temps in the shallows. They start to pop back up on the flats in late March frequently. Seasonally the best months for targeting bonefish are June through October with September and October being our best months which is when we catch our larger bonefish.

We treat out permit here in Key West very special an incredible sport fish our permit by many who fish for them are considered catch and release. The season for permit is really considered to be year round. I mention them in this because there is an inshore season and offshore season when they can be targeted when fishing Key West. Mid April permit head offshore to spawn. They chose certain areas to congregate and procreate. Often found orbiting wrecks and large coral formations. Permit are found on these offshore locations year round. Key West is a red hot destination for permit on the flats. Flats fishing charters will target permit in the shallows daily.

Our backcountry fishing relies pretty heavy on our winter cast of characters that come in seasonally. Trout, ladyfish, pompano, bluefish and mackerel are all winter season fish that we fish for on our backcountry fishing charters. We call the trips rod benders for the numbers of fish caught on a single trip.